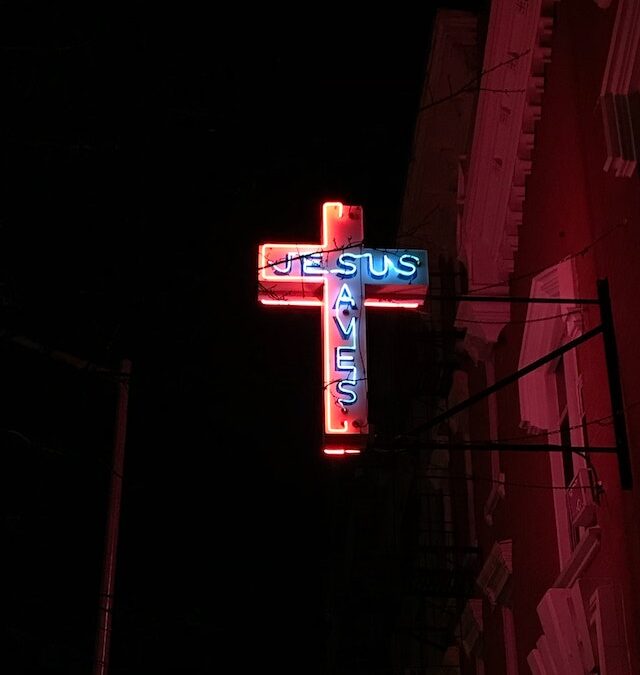 What we find in scripture contradicts how we want to be

People who oppose Christianity will sometimes look for contradictions in scripture to prove to them it isn’t true. I did when I was trying to decide what I believed. What they find instead are contradictions to how they want to live their lives. Either way, they walk away from it.

I think that’s one of the biggest struggles for the cowboy crowd: they see it as a book of rules asking them to live their lives differently so they reject it. At best, they decide for themselves, contradicting scripture they will never read, that as long as they believe in God and judge themselves a decent enough human being, they’ll be there in Heaven.

I was raised in church

My grandaddy was a preacher

I talk to God every day in the barn.

I know my blessings come from God.

I go to a good church.

I read my Bible and go to cowboy church at the rodeos.

I believe Jesus was born in that manger

I believe in God and am a good person.

My family are Christians.

None of this saves you from God’s judgment.

James 2:19 You believe that there is one God. Good! Even the demons believe that—and shudder.

James tells us even the demons believe in God. Clearly it takes something else for us to get to Heaven.

They’re missing what it means to have a saving faith in Jesus and while they judge themselves to be good enough, fail to grasp they’re not going to pass God’s final judgment without a life transformed by Jesus.

Instead, a life condemned to Hell is waiting for them, no matter how ‘good’ they believe they are.

But the Bible isn’t a book full of rules you have to follow to get to Heaven. The Bible guides us to how to live more like Jesus but most importantly, it points to him and how to be saved from God’s judgement. Once we have that salvation, we don’t suddenly stop being who are, but God still immediately sees us as made completely new, without sin.

2 Corinthians 5:17 Therefore, if anyone is in Christ, he is a new creation. The old has passed away; behold, the new has come.

We would rather hold on to our old selves than be made new by a saving faith in Jesus. Instead of worrying about what we lose or give up to be a Christian, we should be chasing after that perfect eternity in Heaven harder than we chase after a championship buckle. Without Jesus, the buckle might be the best reward you ever receive.

With Jesus comes a perfect eternity and a life here that becomes more about what we are becoming and less about who we are holding onto. And while following Jesus becomes the priority, it makes every other part of your life better from the wins to the losses. You get so much more than you think you’re giving up; here and especially after.

Increasing the difficulty level, from milk to solid food

To get better at something, you sometimes have to increase your level of difficulty setting.

I sometimes get to lead cowboy church at a bull riding practice pen on Sunday afternoons. Most recently, a guy showed up with another bull rider who had never been on a bull before. He asked if he could get on the biggest bull they had. He didn’t do it in front of everyone to call attention to himself and there was no one there for him to impress. If he was going to try bull riding, this guy decided he needed to be all-in.

That illustrates one simple point we know from different teachings in scripture about the need to be committed, serious and all-in when it comes to our faith.

But here’s where it takes an important turn.

The producer and stock contractor was frustrated because he has an amateur division of bull riders who never turn out to practice. They typically buck the more rank bulls at the practice pen with the purpose being to help the riders get better. The frustration comes when these guys have ridden 50 or more bulls at the amateur level and won’t come to the pen to get on stock that is actually less likely to hurt them and more likely to help the build their skills.

Many seem to just seem content keeping it easy. Many of us do the same thing with our Christianity.

Hebrews 5 12-14 In fact, though by this time you ought to be teachers, you need someone to teach you the elementary truths of God’s word all over again. You need milk, not solid food! 13 Anyone who lives on milk, being still an infant, is not acquainted with the teaching about righteousness. 14 But solid food is for the mature, who by constant use have trained themselves to distinguish good from evil.

In these verses, the author, possibly Paul, is urging Christians to move from milk to solid food, meaning he wants to see them growing in their knowledge of Jesus Christ and what he had to teach.

Back at the practice pen, the new guy had an amazing experience and while he wishes he had wore a helmet, indicated he would the next time. He jumped into the sport at a harder level and even though he got banged up a little, he’s coming back for more.

You’re only going to learn so much getting on the jump-kicker bulls, you stand a better chance of falling off underneath one and getting hurt and unless you get on some ranker stock, you’re never going to get past that level.

We know as Christians that we will never be perfect like Jesus here in this life. But we know that we’re going through a process that will help us to become more like him, called sanctification. We can sit back and rest in our salvation and resist digging into God’s word and trying to apply it to our lives and situations and God will still welcome us.

But why would we want to settle and not have the chance to be at least a little more like Jesus now?

That’s why Paul urges us to get off milk and onto solid food, practicing what we’re learning and become more Christ-like as we train ourselves here and now for eternity in Heaven.

We can understand the basics in scripture, milk, or we can dig in and let God’s word change us as we understand it more, being fed solid food. Solid food is what prepares us to deal with the challenges and consequences of living in

Or we can just keep getting on jump kickers and never be more than an amateur bull rider.