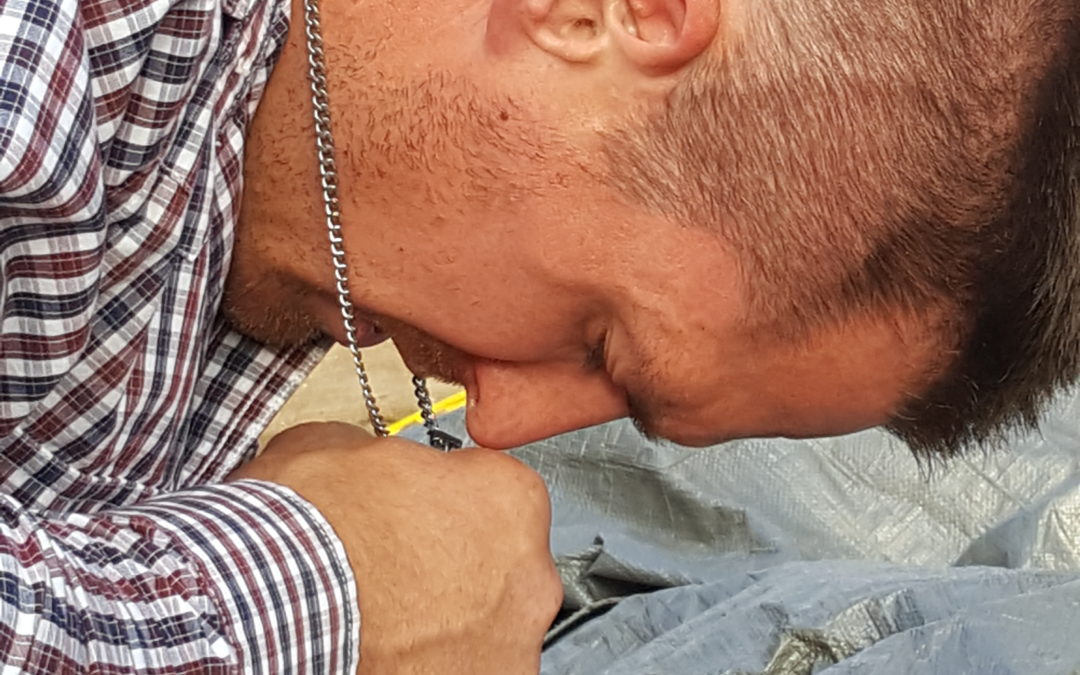 Success is a way to glorify God 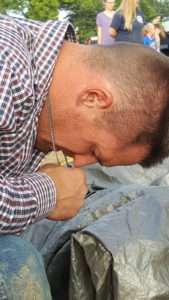 When you’re chasing your gold buckle dreams, do you see God as a means to success or is glorifying Him your purpose?

The answer will tell you a lot about your relationship with Him and changing your focus could bring about success in an unexpected way. Even what the world measures as failure or loss can be success when it points others toward a saving faith in Jesus.

Whatever we do, win or lose, it’s going to bring God glory, even if we never fully see how the pieces fit together.

Ephesians 1:11-12 In him we have obtained an inheritance, having been predestined according to the purpose of him who works all things according to the counsel of his will, 12 so that we who were the first to hope in Christ might be to the praise of his glory.

There’s so much teaching out there that overlooks the what’s in the Bible about struggles and the purpose they serve or the presence of sin that causes the struggles to exist in the first place. A few verses out of context can give us the idea that God will give us our heart’s desire. The only way for that to be true is if our heart’s are focused on Him and His desires for us.

When we seek God, and it’s His plan we’re following, he WILL give us what we ask because it is what he wants for us to begin with.

A verse that often has people thinking God will make wishes come true, suddenly means that yes, of course God will give us what we seek when it’s Him and His glory that we’re seeking.

If a person with a terminal cancer diagnosis demonstrates joy and perseverance and points out to others it’s because of his or her faith in God and understanding of the Bible, they can find themselves at peace with their situation. It doesn’t mean they don’t pray for and believe that God could miraculously heal them. Sometimes that’s part of His plan. I’ve seen a bull rider go from expecting to die from lung cancer to the spreading disease completely disappearing between specialist appointments to talk about how they might extend his time here. I’ve seen a barrel man’s kidneys fail and the poison build in his body to the point they were preparing to move him to hospice to die, but suddenly find them working again and home from the hospital a few days later. And I’ve listened at church to the story of a young man in the congregation who had a disease that slowly suffocated him to death, sharing until the very end his trust and love for God.

Romans 8:18 I Consider that our present sufferings are not worth comparing with the glory that will be revealed in us.

Paul is teaching through this section about the security we have in our salvation and that no matter what we go through here or how hard it might be, God will use us to reveal Himself. When we understand our time here is short compared to eternity and when we understand that our eternal home in Heaven is perfect, no matter what we go through here, we can be encouraged by knowing it can help others find their way home too.

Our gold buckle dreams are worth pursuing in our time here when God is at the center of them and we know He’s using us to bring Him glory, but the rewards we might gain here pale in comparison to what is coming in Heaven.

TESTIMONY — Kody Rinehart, Rienzi, Mississippi — It isn’t about being worthy

I grew up in a Christian home with Godly parents; my mother and father were the youth leaders at our church at time.  Around five or six years old, my mind was wandering and I decided I wanted to get saved, I remember even standing at the top of my stairs and saying in my head “go ahead, you will get to be in water.”  I walked downstairs and talked to my daddy for about 30 minutes about being saved. After we talked and he explained several things that I did not understand, I said a prayer and went back to bed.

A few weeks later a few of my cousins and I were baptized at Hinkle Baptist Church. I held on to that thought and prayer that I was saved and did not have to worry about a thing anymore. When I was in the 7th grade at the FCA Kick-off youth service, I “rededicated” my life, the very next year at the same event in 8th grade I did the same thing, “rededicate.”  While playing football and taking classes together, I became friends with a boy named Drew and he invited me to church at Oakland Baptist Church one Sunday.  I fell in love with it! Oakland had so many chances and openings for me to grow and learn. I was able to be involved with people my age that loved Christ, I did not have that at Hinkle because my brother, a couple of cousins, and I were the only youth and we did not do anything.  When it came to events or activities, I was signed in and ready for everything, even church camp.

Being my first church camp, I was nervous, excited, and ready for the week! On the Monday that we left, something happened to me that, in my mind I thought, would ruin my first church camp.  I was depressed and upset, but tried to stay positive the best I could and open to what God had for me; little did I know that He was using it to soften my heart. God had already started working and on Tuesday night during church group time, our youth minister, Bro. Jerry, passed around pieces of paper and told us to write down what God had been talking to us about that week.

As soon as he had those words out of his mouth, I knew what I had to write down, “salvation.” The next day after recreation and lunch, a friend and I sat and talked about his home life. After about thirty minutes of talking, we went to find Bro. Jerry so my friend could talk to him and get some counseling. I sat, listened, and started to cry because I had taken so much for granted with my family.  After they were done talking, Bro. Jerry excused my friend so now it would just be Bro. Jerry, me, and the presence of the Holy Spirit. He told me that he saw what I had wrote and asked what I had meant, I told him I do not know but I that I do not feel like I am saved. He led me down Romans road and after a little bit of thinking, crying, and talking, on June 13, 2007, at 12:40 pm, I gave my heart to Christ.

Fast forward to two years later, to 16 years-old and being a leader at church camp instead of a student, God began working again.

There were several small things He started showing me, but one of the biggest things was the door He shut for me to being a Veterinarian.  I love animals and being around them all the time, thus, I wanted to be a Veterinarian. I began working at a vet clinic in January of 2009, and I hated it with a passion so that opened up to the question of, “what am I going to do now?”  While at the church camp as a leader God started talking to me but I did not know what it was. One night I even questioned my salvation because I could not figure it out, but I could go back to the time, place, and event of my salvation so I knew that was not it.  One night during worship service, the camp showed a video of a student that went to Kenya for a summer before his senior year. He loved it and felt strongly about going back. He prayed, talked it over with family and his pastor, and read scripture. God showed him the verse of Matthew 10:39, and after He read that verse I felt God calling me.

The guy went on to give up his freshman year of college to be a missionary in Kenya for a year, he answered God’s call. I found the verse in my Bible and read it time and time again. After service, I talked to the camp minister that week and we prayed it over. Later that night after church group time, I finally was able to talk to Bro. Jerry about what God had been talking to me about.  I began having second thoughts because I felt so unworthy to do this, but Bro. Jerry said that he had a teacher from Blue Mountain College to tell him, “If we feel worthy enough to do anything, we should just load up and go home.” Once he said this, I knew there was nothing holding me back to surrender. On June 5, 2009, I got down on my knees and prayed to God that I surrender my life to ministry.  Bro. Jerry had been there from my salvation to my surrender to me graduating, he has helped me so much in my growth and counseling me with decisions that I needed to make. By having a family that loved me, let me go to all the church events, and to move to a church where God was calling me to be at, they helped me to grow and answer His call. By having a minister that loved students and helped me when I needed him, helped me in leading me to Christ and counseling me about ministry.  By having a church that is in God’s will, showed me how to be involved and be in His will also. All three of these have had a spiritual influence in my life and I am thankful for each one.

At the present time, I am trying to answer what Christ has for me and do what His word says.  Around June of 2013 He laid something on my heart about beginning a ministry to reach my fellow rodeo friends that I am around every weekend.  The first Thursday of August, Redeemed Riders made its debut at my house in front of my barn with 8 people. Redeemed Riders is a Bible study/Worship service and a practice for rough stock riders in rodeo.  We meet at 7 pm at my house; have the service, then get on bucking machines at my home. We have had as many as 24 rough stock riders and now having service in a corn crib at on our property. I have gotten to watch cowboy after cowboy come to Redeemed Riders, grow in Christ, and be so excited about the Lord and riding.  It encourages me to see the cowboys coming back every week and having feedback from several of them. I have also just recently took on a job at a Baptist church my area being the youth minister. I get to teach student about the Bible on Wednesday and Saturday nights. God is using me to reach the cowboys and the youth at that church.  I am so thankful He has chosen me to do this.