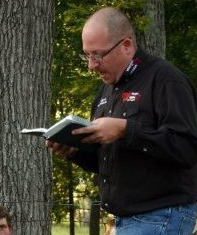 Scott heads up Cowboys of the Cross, a ministry dedicated to bringing cowboy church to rodeos and bull ridings across North America but with a focus on discipleship. The ministry evolved out of Riding for Christ Ministries, the name which Scott operated under for more than 12 years when the ministry was first started by a bull rider he met from Chattanooga, TN.

I’m afraid of horses, far from top physical condition and a nervous speaker in front of crowds. I made my living from my head, not with my hands and am not nearly as handy as I’d like to be.

Never had I imagined I’d be a lay pastor to hundreds of cowboys.

Working as a journalist in a small town in western Ontario, I was at least twice assigned stories about people in the community that were packing up their belongings and going into full time ministry in places like Africa.

I thought they were crazy. Whacko.

I wasn’t a Christian at the time. I had grown up with parents taking me to Sunday school and knew who Jesus was but by high school, after some encounters with some charismatic believers I didn’t understand, I thought evangelical Christians were more like cultists that didn’t think for themselves and were far far too happy to be real.

I had always believed in God, more deeply than I probably realized in high school and university, but I didn’t understand anything about salvation. I grew up in the kinds of churches that are common in Ontario that teach lots about the Bible and how to live your life, but that always leave you just hoping and trusting that you will be judged good enough to enter Heaven when you die.

I’d like to think I was a pretty good person but had no idea that meant nothing in terms of finding a place in Heaven.

Working as an entry-level reporter, almost 20 years ago, pay was terrible but I had the chance to take my first vacation and had saved just enough that I could get someone on about a day’s worth of gas as long as I camped. I chose the Smokies in Tennessee as my destination because I wanted to see some mountains after having had a chance to go to Aspen, Colorado as a kid where I first actually learned, fearlessly, to ride horses.

It was up in those mountains on a quiet road overlooking a single farm far below with a dog barking, a rooster crowing and nothing but mountains after mountains after mountains in the distance that I truly felt God. Clearly, there was something much bigger than me out there when I looked at those miles and miles of mountains that we hadn’t even touched with our box stores and developments.

With a growing interest in photography while working in a newspaper that still paid poorly, I found myself working part time as a rodeo photographer with the Ontario Rodeo Association while making Tennessee a regular vacation spot where just the year before, I had attended my first-ever rodeo.  With journalistic scrutiny and skepticism, I explored religions and the Bible and came to the realization that Jesus was the real deal  and the Bible was truth, committing my life to Christ.

As my faith grew and I continued to visit Tennessee, I connected with some bull riders who led cowboy church and began working with them in ministry while continuing to work in the rodeo industry, moving into marketing and building some great friendships among the cowboys and cowgirls. My role in ministry grew, especially when the other bull riders retired from the sport and left the ministry behind. I was stepping up my involvement in the sport of rodeo and had been to a school for saddle bronc riding in Georgia on vacation one winter. That’s where my fear of horses began. I had become an established rodeo photographer in Ontario and was assisting with the marketing for one of Ontario’s producers and finally. As I grew as a Christian, my role in ministry grew as well, as I started leading cowboy church while finding myself in numerous discipleship relationships. The work of ministry was becoming a full time job while I was continuing to be promoted at work, becoming both a sales manager and editor at one of  the company’s publications. Something had to give as I was doing sermon prep until 2 a.m., while spending hours on the phone and by email keeping up with the cowboy’s I was discipling.

A number of circumstances began to line up where I could see God at work. A network of people to support me had been forming in both countries. My church in Blyth, Ontario, the Blyth Community Church of God, had agreed to commission the ministry and take me on as their Pastor to Cowboys, administering the funding so any donations could be tax receipted and accounted for. God began to press me further through the voices of other people and circumstances that were unfolding. That include a random encounter with a woman in a Christian bookstore in London, ON who heard me telling someone I knew there that I was wrestling with leaving my career and life for ministry. She was overhearing the conversation, at 70 years old, was a retired barrel racer who laid hands on me and prayed in the middle of the store before telling me to leave my job. God pushed in a few other ways and I shocked everyone when I announced I was leaving my career for ministry.

But the biggest moment came within weeks of that when I heard from a young bull rider I had worked with years earlier who had since lost track of completely. The young man’s life was falling apart the day he had contacted me asking for help. I would spend time with him each time I was in Tennessee until finally he just disappeared. His story is very long and complicated but at a time when I was wondering what to do, word got back to me at home that he had resurfaced at a rodeo not to ride, but to lead cowboy church. Then, within a month of going into full time ministry, he tracked me down, again, having no idea I was on a week-long trip to Tennessee, to tell me he had become the associate pastor of a small Baptist church.

It was all the proof I shouldn’t have needed that God was in this ministry and an affirmation that I had made the right decision to quit my higher-paying job for a life in ministry.

The ministry itself now focuses on discipleship with more time than anything built into building and maintaining relationships with cowboys who, while I am so unlike them in background, have embraced my presence in the circuits and more and more, are reaching out with their questions and concerns about the Christian faith.

It’s not about leading hundreds to Christ. Most cowboys will tell you they are already Christians. One of the main focuses this ministry has been led toward is helping them to build authentic relationships with Christ. Many of these guys have never experienced the true freedom grace gives us and never experienced the lasting heart change that comes with a life in Christ.

Through short sermons at cowboy church at bull ridings and rodeos, the messages are often focused on topics of growth from how to pray to what the Bible teaches about patience. As often as possible, it includes illustrations they can connect with like a two-part message on tattoos since so many of them have them and that particular week, several went out and get them one afternoon between events because there was nothing else to do. The message talked about how, if tattoos aren’t inked deeper below the surface of the skin, they won’t last, like a life in Christ has to be rooted deep in the heart, not just in the head with a few simples words of prayer.

Cowboy church is the most visible part of the ministry, but it is merely what opens the door to meeting the riders and building those valuable relationships. Time is spent traveling with or staying with riders and hours are put into telephone and email conversations.

Social networking sites and a ministry web site are maintained as outreaches, distributing monthly messages and other devotionals to a network of more than 5,000 cowboys and rodeo fans now, generating online conversations and prayer requests from across North America and even Australia.

As unqualified as a person may sometimes feel, God can use any of us if we’re willing to follow him when he calls.