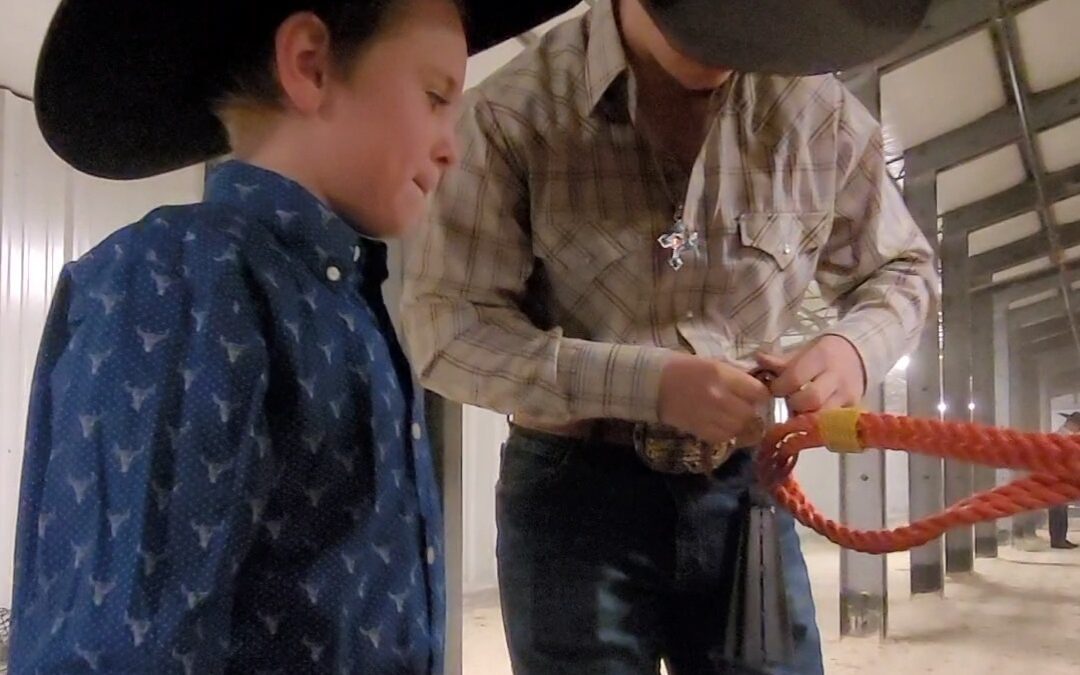 A couple weekends ago at a Bull Riders and Outlaws event I was leading cowboy church at, I watched as a young bull rider, Silas Turnmire, was asked by a little boy Donny Almeraz, to put his bell on his new rope. Silas stopped getting himself read to give the little cowboy a hand and showed him how to do it.

What does Silas get for helping young Donny, barely old enough to be a junior bull rider?

What does Donny get from Silas?

The obvious is help getting his new bull rope set up.

But if Silas, as a Christian, is intentional about what and why he helps someone else, the young cowboy gets to see a glimpse of Jesus.

While imprisoned for his beliefs, Paul wrote Philippians to the church in Philippi and in the first part of the second chapter, was encouraging the church to imitate Christ’s humility to others.

I’ve been around enough to see some rodeo cowboys and bull riders make it to the top and watched them come back to smaller deals in their hometowns or to make a guest appearance at show run by a producer at whose events they used to ride. But what happens is, you no longer see them just hanging out with the other guys, many who they once knew. Instead, you see them talking to the producers and stock contractors who the top hand now sees as the only other big shots there. The guys they used to hang out with are now accompanied by newer riders who suddenly feel intimidated to even approach the guy who might have bucked off at that same arena just as often as the new guys are as they learn the sport.

I’ve also seen the champion bull rider come back to an old venue and get behind the chutes to spot or pull another guy’s rope or if he’s entered, getting some bull rider he doesn’t even know, to pull his rope.

Both can leave an impression that last but which offers more to others?

Jesus was equal to God in power and could do anything. What did he do? He still looked to his Father for help and served others as if they were more important than him.

John 13:12-17 When he had finished washing their feet, he put on his clothes and returned to his place. “Do you understand what I have done for you?” he asked them. 13“You call me ‘Teacher’ and ‘Lord,’ and rightly so, for that is what I am. 14 Now that I, your Lord and Teacher, have washed your feet, you also should wash one another’s feet. 15 I have set you an example that you should do as I have done for you. 16 Very truly I tell you, no servant is greater than his master, nor is a messenger greater than the one who sent him. 17 Now that you know these things, you will be blessed if you do them.

There’s a lot to unpack in these verses but for what we’re talking about in this situation, we’re seeing Jesus, who they know is their Lord, showing humility and setting the example of serving others. If he can humble himself, how can we not?

So if I know you’re a Christian, which actions point me to Jesus? And if I don’t know anything about Jesus, but I see you humbling yourself and being kind to people you don’t even know or that I think are beneath you in status, that gives me some hints that there’s a reason you’re different. You as a Christian are hopefully going to talk openly about Jesus and have a chance to talk to me about him.

Attaching that bell for the young kid may be a really simple illustration from something that took no time or thought at all for Silas, but if we see ourselves as Christians before anything else we are or do, then we take actions like that knowing it can both point others to Christ and bring glory to God.